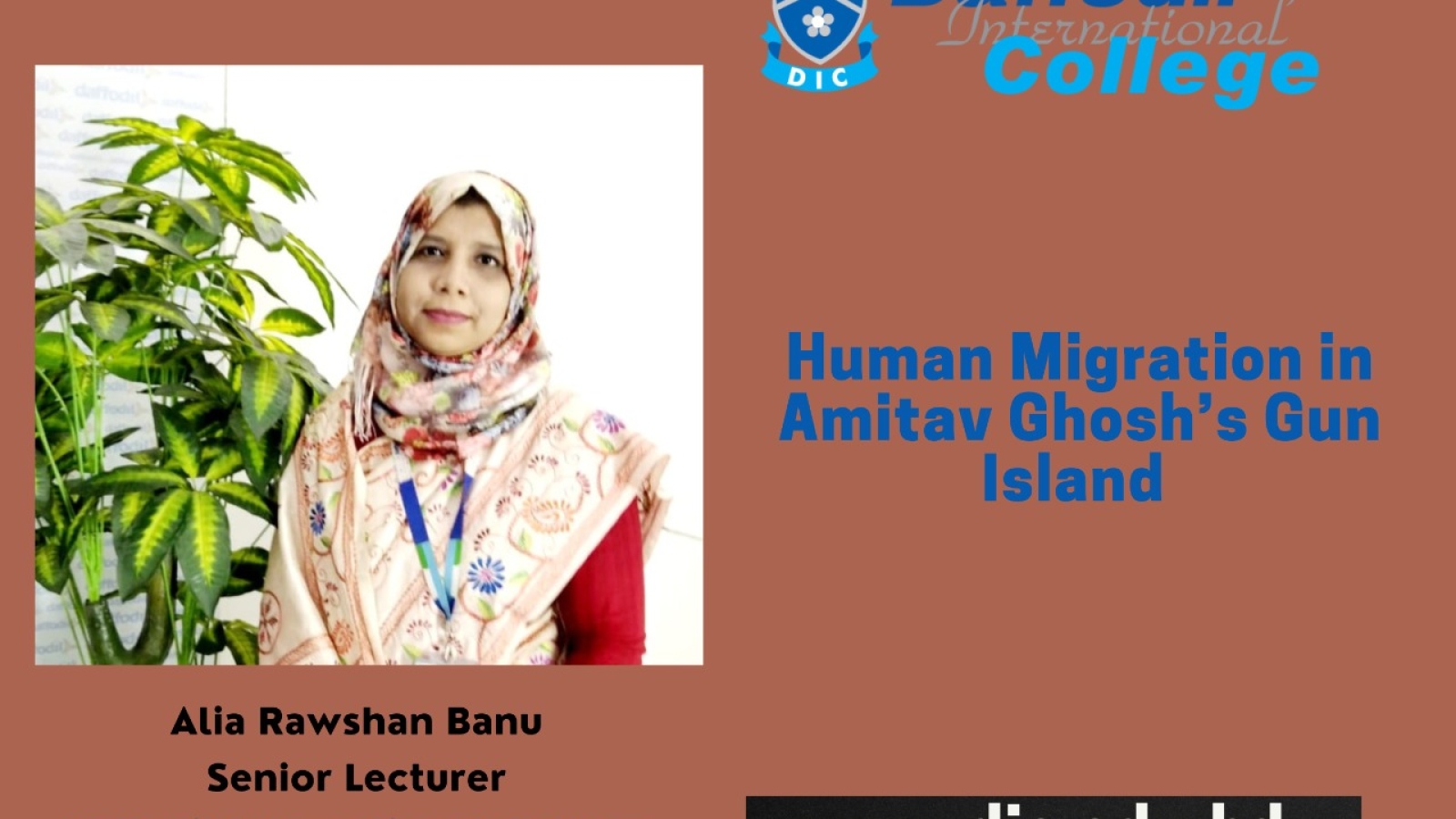 In Gun Island, Amitav Ghosh deals with two contemporary global issues such as climate change and human migration. In this novel, environmental occurrences have been portrayed as increasingly common issues around the world. The events like storms in Sundarbans, fires in California, tornadoes and floods in Venice have been occurred due to climate change. At the same time, Ghosh links the adventures of a seventeenth century Bengali merchant travelling between the Bay of Bengal and the Mediterranean to the struggles of present-day migrants who are moving across the borders.

The novel Gun Island begins with Dinanath, a middle-aged Bengali immigrant and rare book dealer living in Brooklyn. In one of his annual visits in Calcutta, he gets entangled in an old legend ‘Gun Merchant’ or ‘Bondooki Sadagar’ who himself got involved with the snake-goddess, Manasa. Ghosh’s skillful use of the legend of Manasa devi along with Dinanath’s quest for resolving the mystery of ‘Gun Merchant’ or ‘Bondooki Sadagar’ allows him to address issues as diverse as climate change, mythology, Venetian history and human migration.

Amitav Ghosh depicts Dinanath as a successful migrant settled in New York, travelling across the world for his interest and purpose.  He represents the class of ‘Global Citizens’ who enjoys the privileges bestowed upon them in this globalized society, yet he lives an unfulfilled life searching for love, purpose and interests. Another two Bengali teenagers, Tipu, a computer whiz, and Rafi a fisherman, both try to find a route to Europe aided by human smugglers. The stories of Tipu and Rafi were told in the perspective of Bengali refugees in Europe. Gun Island draws a direct parallel between the migrants leaving their homes in quest of better life and the dolphins and other animals are forced to abandon their old and familiar habitats due to rising temperature and pollution revealing the entangled destinies of human and non-human beings on earth.

Ghosh portrays Tipu and Rafi as having had access to technology since their boyhood and they are good at using digital devices like smartphones, computers. Through internet browsing, they come to know about the safe and secured life in foreign country and have been fascinated by those allurements. Tipu thinks that “the internet is the migrants’ magic carpet; it’s their conveyor belt” (Ghosh 2019, p. 61). This novel reveals the drawbacks and destructive impacts of wrong usage of technology. In an interview, Amitav Ghosh remarks,

A lot of this is happening because the systems exist, and these systems are not trivial systems.      The human trafficking business is the biggest clandestine industry in the world, even bigger than the drug trade. It reaches very deep into society, especially poor societies. On top of that,

you have the information system. If you are a poor kid, say in Bangladesh or Pakistan—both of   these countries have higher rates of internet penetration rates than the U.S.—you see these         pictures on your cheap smartphone. You have social media and you are connected to people who can help you move. These technologies are absolutely at the heart of movement.

From internet, Tipu collects information regarding irregular routes to cross national boundaries but people need to have permission from the government in order to cross the borders which have been constrained by the authority of the respective countries. However, in ancient times, such restrictions had not been so strict when people migrated from one country to another.

Another important issue Ghosh wants to clarify the readers that the systems of the past differ from those of the present as the migrants from India to Venice like Rafi, Tipu and similar expatriates cannot be termed as slaves and they willingly plan to migrate. Here, the author informs us that “the world had changed too much, too fast; the systems that were in control now did not obey any human master; they followed their own imperatives, inscrutable as demons” (Ghosh, 2019, p. 280). In this novel, we find that 21st century Italians are dependent on the labour of the immigrants who have left their birth place deliberately and cross international boundaries to reach economically affluent countries for a secured and improved life.